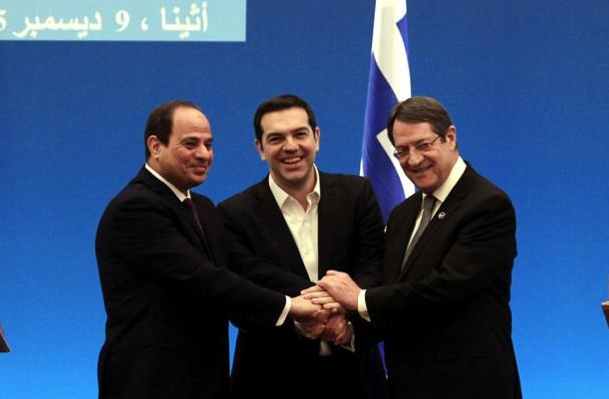 Cyprus, Greece and Egypt agreed on Wednesday 9 December to speed up talks to demarcate sea boundaries in the Eastern Mediterranean, as part of efforts to turn the region into an offshore natural gas hub.

“The discovery of significant hydrocarbon reserves in the east Mediterranean and at Zohr, can and must be a catalyst for wider regional cooperation,” Anastasiades said after the third such summit since November 2014.

The leaders set up a joint committee to work on tourism, investment and energy projects. They will explore the potential for new pipelines in the region depending on the level of gas reserves found in the eastern Mediterranean, Tsipras said.

“We aim to have visible and tangible results through the joint projects,” Sisi said.

Cyprus defined its economic zone in 2004 and since then its maritime boundaries with Egypt and Israel. It found gas offshore in 2011.