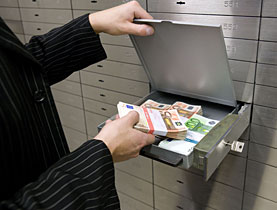 EU finance ministers have taken a major step towards ending banking secrecy, agreeing to the automatic exchange of account information.

The 28 finance ministers meeting in Luxembourg on 14 October approved a directive requiring banks to swap bank account information with tax authorities in other member countries.

This is a real “milestone for what the EU does for its own progress, but also for the international fight against tax evasion,” said Italian Finance Minister Pier Carlo Padoan, who presided over the meeting.

Under the new rules, national tax authorities will have the unprecedented power to collect information on all bank accounts and automatically exchange it with other participating countries.

The decision puts in place commitments already made by the EU to the Organisation for Economic Co-operation and Development to implement reforms to fight global tax evasion, a practice blamed for robbing public coffers and making the global financial crisis harder to tame.

With the deal, EU countries agreed to set up the automatic exchange of bank details by 2017. Austria won a one-year delay it said was necessary to set up the procedure.

“Bank secrecy is dead and automatic exchange of information will be applied in its widest form,” said Algirdas Semeta, the EU’s taxation commissioner.